We all have fond memories of playing with toys in our childhood, be it a plastic soldier, remote control car, favorite jigsaw puzzle, or superhero/princess figurine. Children of slum dwellers, street children or kids staying in remote villages often are devoid of this experience altogether. They have to settle for makeshift toys made from tyres, plastic bottle, sticks, rope, etc. whatsoever limited things they have around them.

Education on its own can not foster holistic child development, Toys play a crucial role as well. They help the children in exploring and making sense of the world around them. They boost the child’s imagination and creativity skills. They allow the child to emotionally relate to others through imaginative play and role-playing with friends. When children are feeling distressed, they often find comfort in their favorite toys. 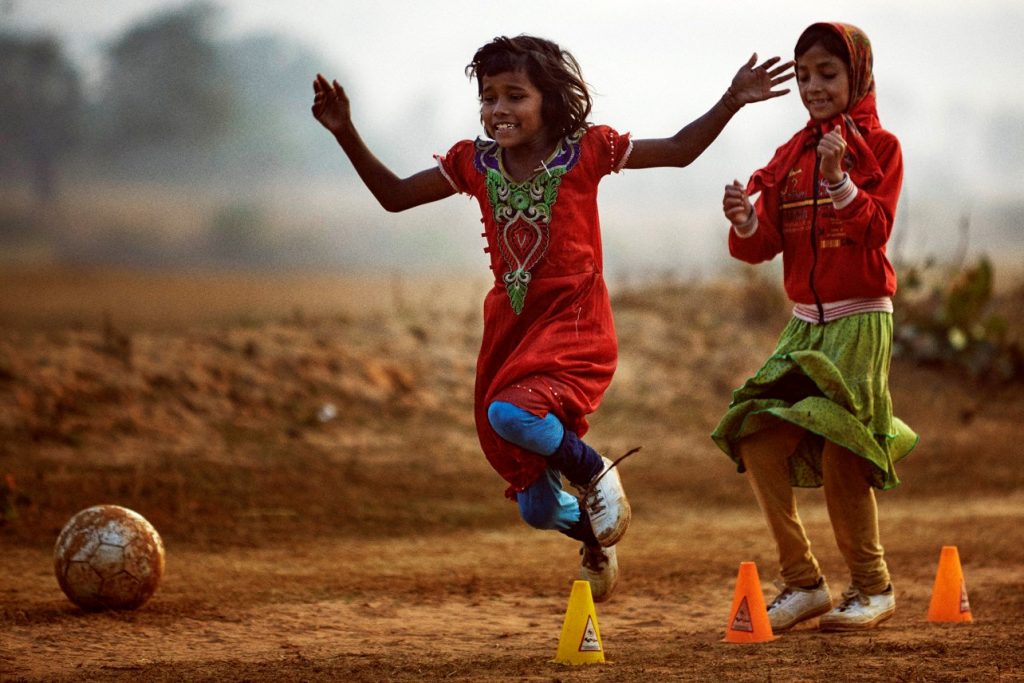 Flow chart of activities carried under our program: 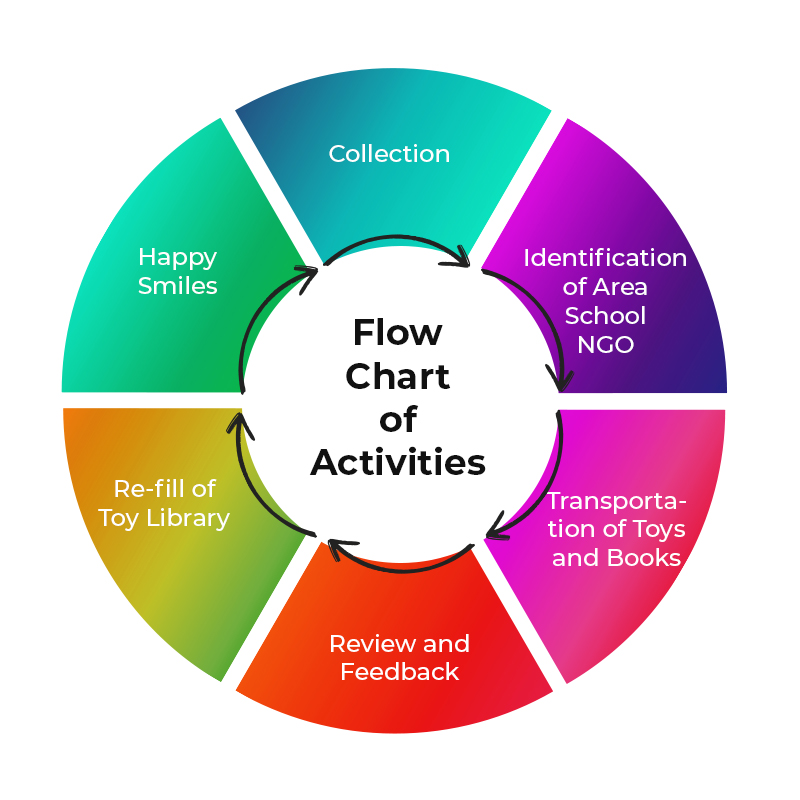 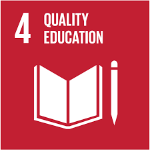 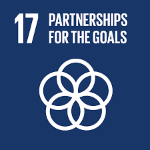 The months and years of hardwork seem all the more worth it, as we see the tensions fade away from the faces of the people and hope fill their eyes. These stories are close to our hearts as they serve as a reminder of the pledge we undertook all those years ago of bringing positive change in the society.
We are happy to introduce to you some of Lakshyam’s exceptionally brilliant and bright kids who have overcome tremendous adversities and powered through it all. Their love for life inspires us to extend the best of resources to them.

Deepak was a ragpicker , when we use to open our centre early morning 9 am.. 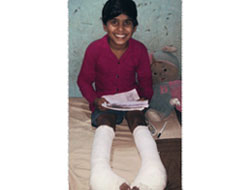 Ankit is 9 years old and who is suffering from Club foot.. 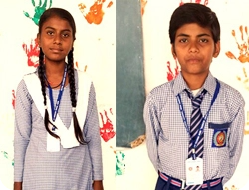 Brother sister duo were earlier a housemaid and a corn seller..

Deepak was a ragpicker , when we use to open our centre early morning 9 am , he would be on his way back from rag picking from the roads as his working hours was early morning. With those dark brown eyes he use to stop at our gate and look inside the kids coming in and settling down. It took us 2 months to bring him inside the school. Initially when he started coming to school he would bring his bag full of rags keep at the entrance and then walk in. Due to lack of proper waste management in our country , his hands use to bleed almost thrice a week as 80% of us thrown glass bottles, plastic bottle, paper , card board and along in the same bin anything which is broken. These are further dumped on the road sides. The kids so called “Ragpickers” then pick out stuff from this garbage that they can sell further and earn their living. Deepak being one of them. The eyes had that passion to study, his family pressure made him pick the rags but for 1 year he/ we managed both together. After a year he was completely with us as he was a bright hard working child and his family was counselled regularly. Another 1 year his growth was tremendous and within 2 years he was in a state where we though he can be enrolled in a proper school. Today he is going to a private school and in Class 3 and we hope he becomes a police officer that’s what his dream his !!

Ankit is 9 years old and who is suffering from Club foot, also called congenital talipesequinovarus (CTEV), which is a congenital deformity involving one foot or both. The affected foot appears to have been rotated internally at the ankle. Without treatment, people with club feet often appear to walk on their ankles or on the sides of their feet. Due to this condition he is unable to walk. Lakshyam provided his family with the support and helped Ankit to successfully go through 6 operations which has treated his one foot completely and another 6 operations would be taken care off for his other foot procedure. We are providing him with medicines and also other resources that are required. We are hoping that he recovers in the next 6 months. A student from IIT Delhi takes 2-3 hours classes for him so that his studies don’t lag behind due to his physical condition.

Brother sister duo were earlier a housemaid and a corn seller, before they came to Lakshyam. Mother is a widow staying with her brother having her own constraints to feed the family. Once the sibling joined the school, they both seemed to be the most brightest kids of our centre. When their father was alive they both were going to school. So fortunately their base in studies was well in place. After keeping them with us for 2 years and bridging their educational gap ,Lakshyam has enrolled them to a private school and paying their fees as there is no government school in the area. Deepa, their mother has joined our women empowerment program and stitching bags for us and is able to earn Rs. 3000 per month to sustain her family’s basic needs. 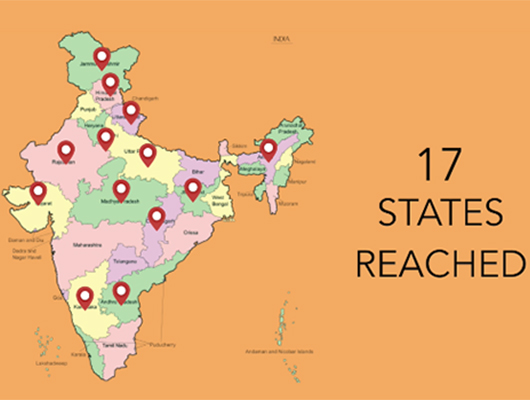 Shop For a Cause

Our project Rooh (Awakening Women’s Soul) empowers women to generate self-employment and a means of income through imparting vocational training and professional skills. We help women overcome their worst fears and become independent. They are trained in different fields according to their interests and involved in a variety of activities which include making Handicraft Products. These handmade products are made mostly out of waste and converted to really useful items. For the women making these products is a symbol of pride that they have learned to be on their own and proved themselves that they are self-sufficient.
By purchasing these hand made products you can make a small contribution in raising the spirits and confidence of the less-privileged women who make them specially for us.
The profit that comes from selling these products is given to the women who create it and some of it is utilized in the programs of Lakshyam related to education and empowerment.
Below are some of the Handicraft Products made by women under Lakshyam’s Rooh Program.

These cute doll pencils are created with waste material like katran, gottaprocured from various designers and manufacturing units.

These dolls are also made from otherwise considered waste material like leftover katrans and gotta. These potlis can just carry anything and look awesome with any attire. Women can also use this as a purse.

Made from waste, these doll magnets are quite fascinating and actually better than machine-made products with synthetic. These products seem kind of vintage and are extremely durable.